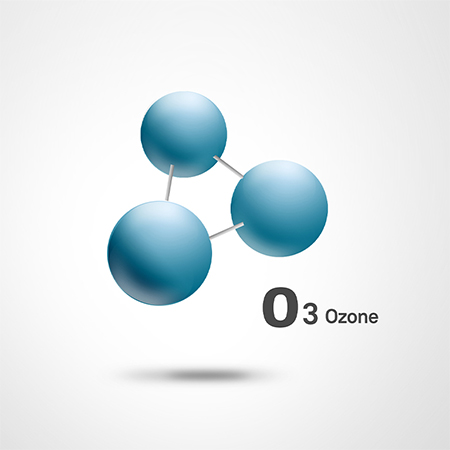 a thunderstorm is ozone. The word ozone is derived from the Greek word “ozein” and means “smell”.

HOW DOES OZONE WORK?

Ozone works on the principle of oxidation. When the static-laden ozone molecule comes into contact with something “oxidizeable” the charge in the ozone molecule will immediately flow towards it. This is because ozone is unstable and wants to return to its original form (O2). The ozone can oxidize with all kinds of matter, but also with odors and with micro-organisms such as viruses, fungi and bacteria. This loosens the additional oxygen atom from the ozone molecule (O3) by means of discharge and it binds to other matter so that eventually only pure and stable oxygen (O2) remains.

Similar to chlorine and chlorine dioxide, ozone has a strong disinfecting capacity due to oxidation. Oxidation is capable of greatly reducing and/or destroying pathogenic (disease causing) populations, and to disinfect water and surfaces. The oxidation power of ozone is 3 500 times greater than that of Chlorine and Chlorine Dioxide.

Ozone has a wide range of uses, without the need for additional chemicals. Ozone is the most environmentally-friendly oxidant when applied in, inter alia: water treatment, air purification, disinfection, antivirus, odor removal and other hygiene-related applications.

The main benefit of ozone is its clean character because it only oxidizes material, forming almost no by-products. Because ozone has a strong recognizable odor, very low concentrations will be quickly noticed. When treating your living area, both humans and animals should leave the room!

Do you know we can get ozone from a ozone generator device?

How completely does an ozone generator kill mold?
Scroll to top